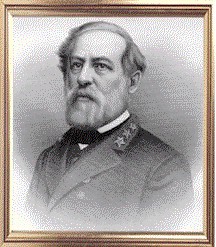 Robert E. Lee.
Yes, that's a bit strong, and yes, there is a conversation at Brad DeLong's place about which Civil War commander was the most wasteful of life.

Might I recommend A Victor, Not a Butcher (details or compare prices) that argues General Grant was more careful with lives than any other eastern theater commander including General Lee. The summary: (p. xv.)

Both Grant and Lee were aggressive generals, but only Grant's aggressiveness was consistent with the strategic aims of his government. ... Lee needed a tie but went for the win, while Grant needed a win, went for it, and achieved it.

How effective was Grant after the debacle at Cold Harbor? (Author Edward Bonekemper argues was not the pointless slaughter many have portrayed it to be). (p. 265.)

As Jean Edward Smith concluded, Grant's detaching a 115,000 man army from his foe and secretly crossing the James River "was a perilous maneuver and an incredible tactical accomplishment, and it in no way diminishes Patton's accomplishment [in changing fronts during the Battle of the Bulge in 1944] to say that it pales alongside Grant's withdrawal from Cold Harbor and his crossing of the James in June 1864."

Mr Bonekemper cites other sources that provide some insights into the character of the man. Contemporary leaders might study these (p. 256). First, on his alcoholism. Citing James McPherson,

[Grant's] predisposition to alcoholism may have made him a better general. His struggle for self-discipline enabled him to understand and discipline others; the humiliation of prewar failures gave him a quiet humility that was conspicuously absent from so many generals with a reputation to protect; because Grant had nowhere to go but up, he could act with more boldness and decision than commanders who dared not risk failure.

Not a sign about him suggested rank or reputation or power. He discussed the most ordinary themes with apparent interest, and turned from them in the same quiet tones, and without a shade of difference in his manner, to decisions that involved the fate of armies, as if great things and small were to him of equal moment.

Posted by Stephen Karlson at 23:29