Amtrak and the New York department of transportation will be providing a new old-look headhouse for Schenectady.  The artist suggests it will have an old-look pointless arrow logo. 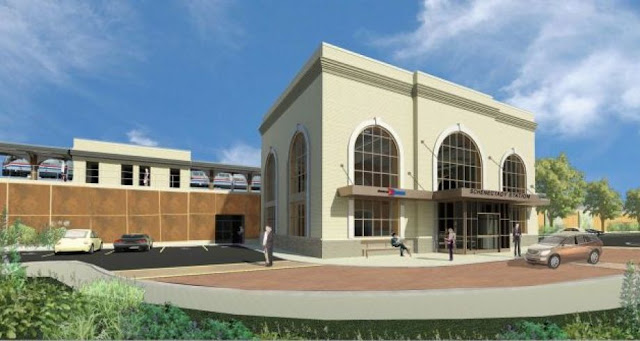 
There will also be two main tracks between Schenectady and Albany. As that stretch is good for 110 mph running, there might be some fun train action to come.


The DOT said the design of the new station is inspired by the aesthetics and architecture of the former Union Station built on the same site in 1910. The new station will be owned by Amtrak and will be slightly larger than the existing station built in the 1970s.

The new station will provide waiting and ticketing areas, as well as improved accessibility for people with disabilities. There will be a new platform and the concourse access will be renovated, including the installation of a new elevator. A secondary ramp will be built to provide a second exit from the platform for emergency use.

Parking and bicycle and pedestrian access at the train station also will be improved. The parking layout will be redesigned and sidewalks, lighting and bike racks will be added.

And if you wanted to build a model of the station for your layout, you could start with this.

That's the Union Station building from Bachmann's Plasticville line, which is still in production, and Model Train Stuff have it on offer at a good price.
Posted by Stephen Karlson at 23:57