It has been a difficult November in Packer Nation, with the Green Bay Packers missing opportunities for last-second victories or ties in three games, meaning Jay Cutler wins a game in Green Bay, and the Detroit Lions win a game in Green Bay, something that last happened before Mikhail Gorbachev abdicated.

But Saddam Hussein was still alive, although in captivity, the last time Minnesota's Gophers wielded Paul Bunyan's Axe, and the last time ownership of the Axe required some late heroics from Wisconsin.  Minnesota hired Jerry Kill away from Northern Illinois to strengthen the football program, and Mr Kill did, but at the time he retired, the Axe remained in Madison, where it still is. 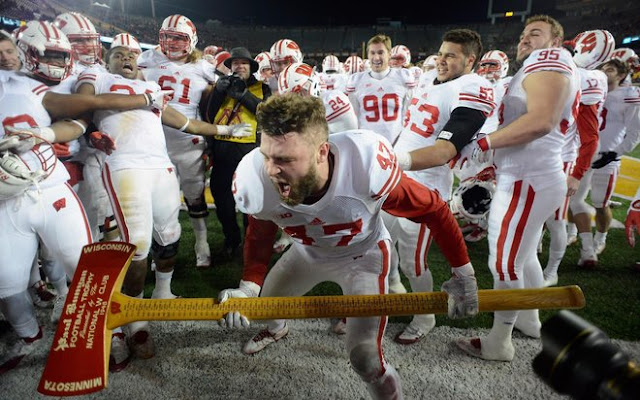 It is likely that the Axe will return to Minnesota sometime.  When it does, if that's at Gopher Stadium, or whoever has the naming rights at the time, this prediction seems likely.  "Given the length of the Wisconsin winning streak, it is likely that any future claiming of the Axe by the Minnesota team is going to have Gopher fans actually tearing down a goalpost, once the players have pantomimed the act."

Perhaps by then, football will have rethought the excessive use of replay and the committee meetings of referees that the no-huddle offenses have rendered obsolete for the players, and perhaps we will see the end of "completed the process of the catch" and illegal picks that are not illegal picks, and all the other ways that the officials have intruded themselves excessively into the game.

But we're still likely to see playoff situations resolved by teams getting a little help from other teams, as in Northern Illinois returning to the Mid-American title game in Detroit with an assist from Western Michigan.
Posted by Stephen Karlson at 23:04