Illinois is not a good place to do business.  Wisconsin is, and there are signs of extensive construction going on in Kenosha and Racine counties west of The Milwaukee Road and east of Interstate 94.  Some of this is Foxconn related work, and some of it appears to be logistics and light manufacturing.  I'd feel better if some of the industrial plants hard by the tracks had spur tracks and loading docks suitable for box cars, one of these days the logistics model based on 53 foot containers and overtired truckers is going to fail.

Wisconsin, however, is among the leading states for new jobs added in manufacturing.  Now comes Komatsu, the Milwaukee successor to Harnischfeger and Bucyrus-Erie, moving its offices and manufacturing plant to lakefront property.

It would cover 54 acres on the waterside Solvay Coke property on East Greenfield Avenue, with 2.5 million square feet of offices, manufacturing and research and robotics labs, according to Thursday’s announcements from the company and state of Wisconsin. Komatsu would grow to about 1,000 full-time jobs in the Milwaukee area through the project.

The old coke works is a brownfield site, likely to require extensive cleanup before even a hoist factory and offices are built there. As far as the job creation, well, some of that is a reallocation of work from elsewhere.


The company earlier this year renewed its labor contract with the local United Steelworkers union. Since that time, it has increased hiring and transferred more manufacturing operations to its Milwaukee headquarters facility from China. Komatsu also decided the Milwaukee plant will produce the company’s first P&H 4800XPC, which is the largest mining shovel Komatsu has ever made. Engineers in Milwaukee designed that shovel.

“We are preserving existing jobs, laying the groundwork for new employment opportunities, investing in the workforce of tomorrow, and helping attract talent to the area,” said John Koetz, president - Surface Mining at Komatsu Mining.

Komatsu’s project marks another major manufacturing development for southeast Wisconsin. Past deals of this scale have been in Racine County with Foxconn Technology Group, or Kenosha County with gummy-bear maker Haribo. The Komatsu announcement is just south of downtown in Milwaukee, where Mayor Barrett has been urging companies to bring more manufacturing jobs.

Bucyrus-Erie used to make some huge draglines, which had to be shipped to the pit in pieces, assembled on-site, and they generally were dismantled afterwards.

It's not just liquid crystal displays, steam shovels (sorry if that's archaic these days) and Gummi Bears.  The financial sector is doing well as well.  We saw Northwestern Mutual's new headquarters during the summer (as well as the bears) and BMO Harris Bank (or whatever they trade as these days, I lose track) have more offices taking shape, along the car line. 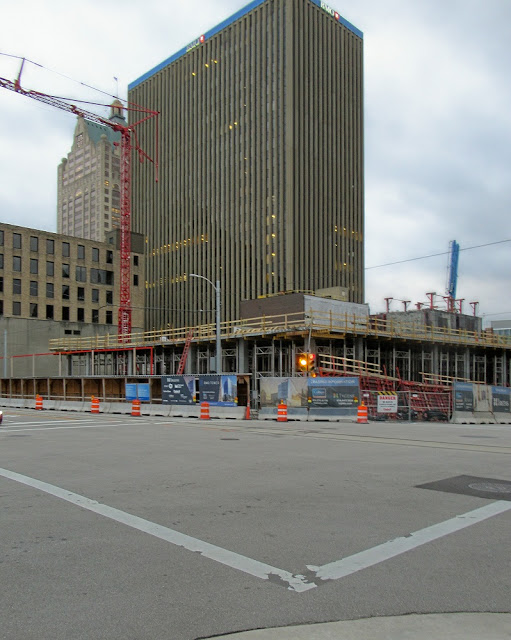 That's the southwest corner of Milwaukee Street at Wells.  Northbound streetcars pass this way.  Years ago, the Fourteen line streetcars and trackless trolleys used this street, in both direction.

There's so much new construction that the weather-forecasting flame of the Milwaukee Gas Light Company office tower is almost obscured. 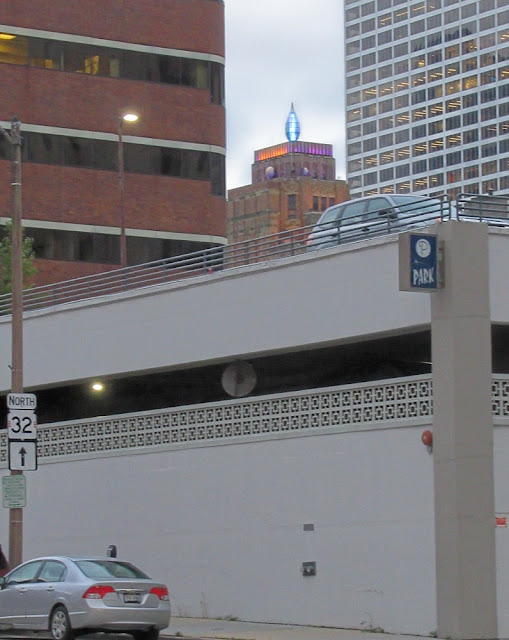 Conveniently, there was neither a change in the weather, nor in the immediate future, rain or snow, permitting the blue (meaning no change) flame with some gold trim, conveniently Milwaukee Brewer colors.  We'll be watching the BMO bank and Northwestern Mutual office towers for lead times.

Toward the end of the First Era of American Greatness, that tower took less than a year to build and occupy, including working around the property of a tavern that was in foreclosure, and building basement vaults under the sidewalks.
Posted by Stephen Karlson at 17:11