HAVING FUN IS PROBLEMATIC.

One of the events at Milwaukee's German Fest this year was the Stihl Timbersports competition. 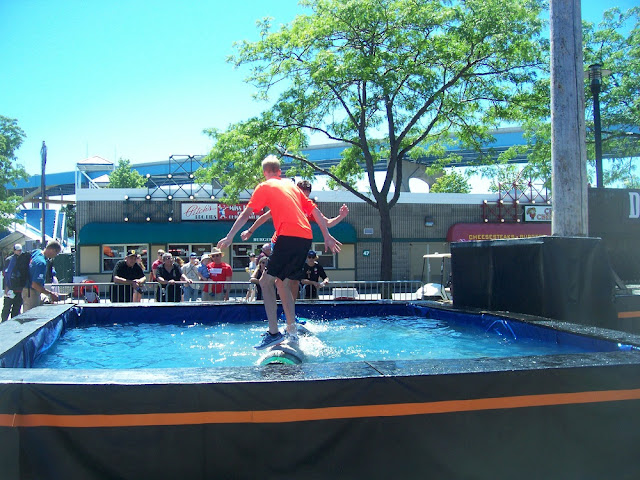 It seems like a logical event for a German company (the alpha codes describing the various products reflect the German names of the power tools) in Wisconsin in the summer, where losing the log-rolling competition involves a cooling dip.

But I sat in on some of the competition, which involves cutting within the lines (that's not so easy when your tool is axe or chain-saw and your work piece is an eighteen inch log and you're racing another logger and the clock) and had some time to rest and reflect.

That's always dangerous, even for a retired academic.  Events sponsored by beer companies.  Prizes include Ram pickup trucks.  Power tools.  Gasoline.  Flannel shirts.  Got me thinking whether some of my onetime colleagues would be put off by the entire endeavor.  That's quite likely, but I never expected the university or the economics department to entertain me.  I'm capable of that on my own, thank you very much.

But I also had time to reflect on whether there would be people working in culture studies or the like that might find the endeavor wrong in some basic way.  Yup.  (I read these sites so you don't have to!)

I may have chopped out a particularly egregious example of a possible anathema on timber sports, but what the heck?


The surface level attempts of the outdoor industry to grapple with equity and diversity is leading to further silencing, erasure, and exclusion. The problem is that most people at the top in the industry like to stick with safe words like “inclusion,” “diversity,” and “equity.” And they want to define these words themselves without addressing the root cause: the commitment to the construct of Whiteness, and the pervasiveness of White supremacy culture in our businesses, and the spaces in which we organize.

Practicing anti-racism in our workplaces, at festivals, at community gatherings, at home, even at our favorite national parks is key to creating a safer community for all because the violence of racism does not disappear in the woods or mountains. It’s there in our conversations, in our actions, and in our beliefs. The unintentional racism of the outdoor industry is just as hostile as the racism of the people who are lighting their Nikes on fire. We need to make visible how we White people have been conditioned from living in a White supremacist culture. Without examining our patterns, assumptions, beliefs, and actions, we will not achieve the authentic community that we claim to want and say we are all about.

That's about people who go walking or mountain biking or climbing in the national parks and other upscale, quiet retreats. No chain saws or pickup trucks necessary, and yet going to the woods to play is somehow privilege.  Sad!

And having competitions for women?  Perhaps it's all about the money, or perhaps it's being patronizing.  Seriously.


When I began to explore and understand how women managed to create a loud voice in the industry and mobilize change, I soon realized that their movement towards equity was accompanied by statistics that happen to be in their favor. In one of the panels led by some of the women who have been responsible for the recent changes, one topic that was raised involved the effort to cater to women who wore sizes 14 and up. It was openly shared that 67% of the female population in U.S. consisted of such type of consumers. I don't doubt that the women leaders on the panel believe that there should be equity in catering to these consumers, and that they truly want to create change, although I question why it took them a long time in the first place to finally include a line of products that cater to this group of women. Having said that, I must give credit to one company at the panel: Columbia. Columbia is one of the very few companies that has been catering to the plus size communities long before women empowerment became the biggest buzz word in the outdoor industry.

As I continued to attend the panels that addressed the issue of women empowerment, it became more obvious that the efforts made by companies were mainly driven by the fact that they benefit financially from catering to the marginalized segment of the market; hence, the point being, don't fool yourself into thinking these efforts are being done out of morality or altruism alone. Ultimately, it's the shift in the makeup of consumers that created the motivation for companies to finally give in as doing so translates into yet again accruing more wealth for themselves.

Put another way, a business that wants to discriminate in employment or in customer base has to pay a price for its discrimination.  That's messy, yes, but less messy than letting the angry voices in Grievance Studies dictate what is permissible, either in the marketing of outdoor wear or in the conduct of logging competitions.
Posted by Stephen Karlson at 12:56