IT'S NOT ENOUGH TO HAVE A QUARTERBACK CONTROVERSY.

The Green Bay Packers enlarged the kind of bunting you'd display for a patriotic speech, or perhaps they're anticipating a merger of the coastal states with France, for the flag ceremony before shutting out the Buffalo Bills. 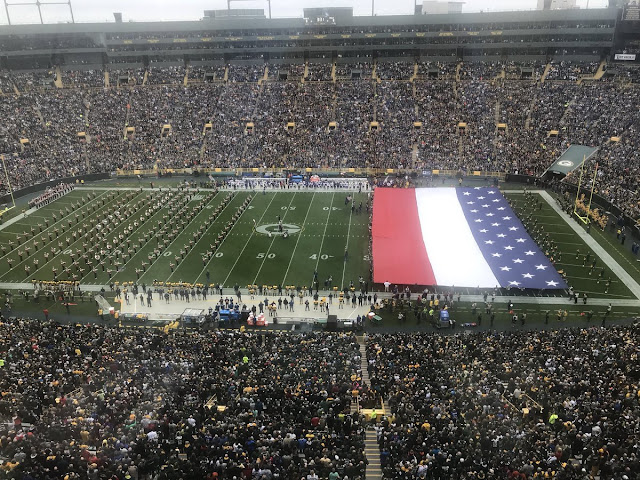 The Victory Girls are having none of it.


Green Bay’s owners are the season ticket holders. They are the only team with a public form of ownership. That team is beholden to it’s ticket owners on a major scale. So I have to wonder, how many of the Green Bay Packers owners approve of the message that was sent yesterday?

I certainly hope the majority of Packer ownership does NOT approve and is ripping the team management a new one for this idiocy. Because right now, the Green Bay Packers organization screwed the pooch on this one.

"Not new," according to Green Bay's Press-Gazette.


“The banner used during Sunday’s pregame ceremony supplemented the three U.S. flags on the roof of the stadium and the flag carried by the color guard on the field," [Packer spokesman Aaron] Popkey said.

"We've used such displays from time to time in the past when other pregame elements take up a significant portion of the field. To avoid causing confusion, we will not be using such displays in the future.”

The "other pregame elements" included the University of Wisconsin Marching Band, on longtime Michael Leckrone's retirement tour. The Band were available account the Badger football team having their bye week.
Posted by Stephen Karlson at 14:48