NO SALAD BOWL, NO SPRING WATER.

It's been what, two months since the conclusion of the O Scale convention in Rockville, Maryland, and a week since the Milwaukee Brewers season ended.  Perhaps that's an opportunity for a Performance and Practice featuring the operation of the Capitol Limited, the food having already been evaluated and found edible but a step backwards.

The Capitol still maintains a business-friendly westbound schedule, with a late afternoon departure from Washington, a midnight arrival, if all is going well, at Pittsburgh, and an early morning arrival into Chicago.  Passengers connecting from Pennsylvania points west of Philadelphia have a longish layover between the one day train and the Capitol.  Passengers from New York, Newark, Trenton, or Philadelphia can probably shorten their journey by catching one of the regional or Acela trains along the Northeast Corridor.

Illustrations below the jump.

That title refers to Baltimore and Ohio's famous family-style salad bowl and the Deer Park spring water in the carafes on Capitol dining cars.

I wasn't in the mood to buy some bottles of Deer Park to set up in my room.  The coolers at the convention, however, did respect the tradition. 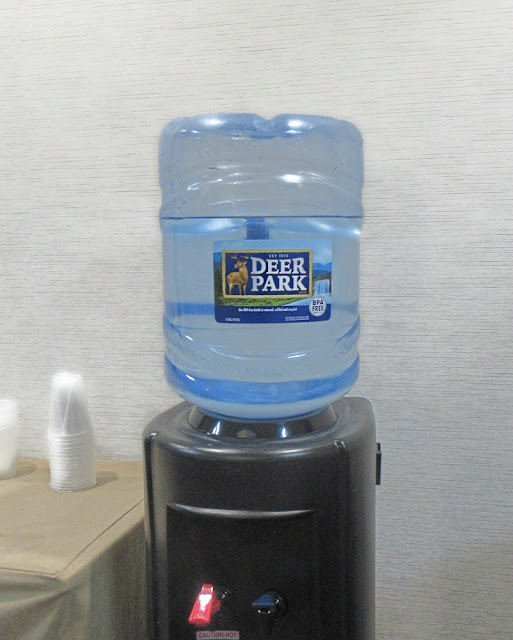 Washington's subway offers a one-seat ride from Rockville to Union Station, and the Metropolitan Lounge is a decent refuge from the bustle and skimpy station services (yes, despite the food court) of Union Station.  The boarding queues for trains snarl much of the public space: yes, I confess to liking the sleeping cars for use of the lounges in the big cities, and the priority boarding.

The American Legion post in Cumberland faces the tracks. 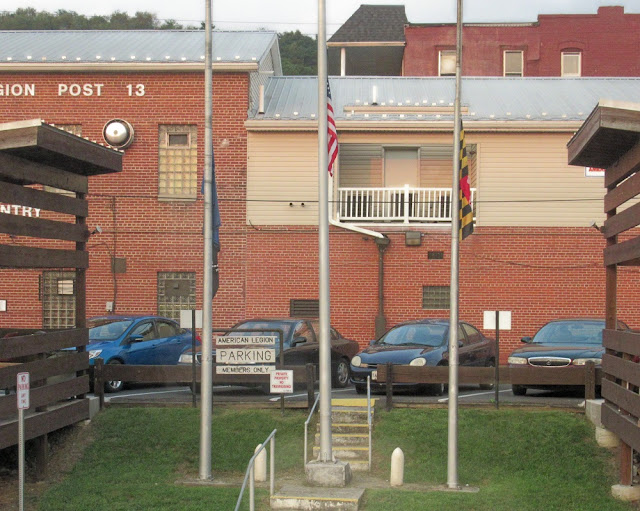 It's still a pleasant Sunday evening to hang out and watch trains, or swap stories. 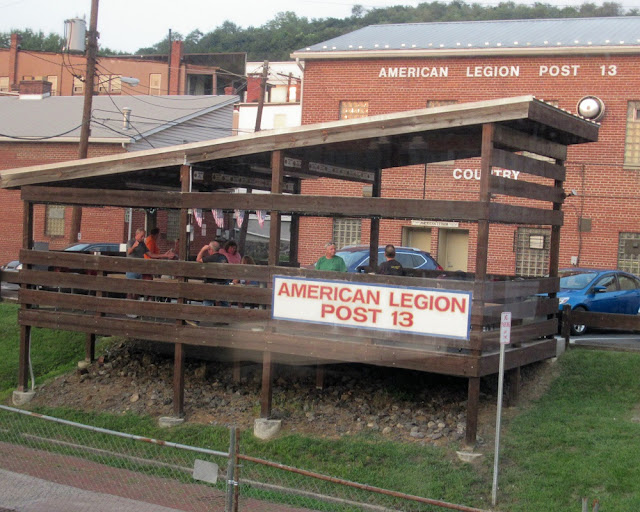 West from Cumberland, the ascent of Sand Patch grade begins, and 29 overtakes westbound autoracks, passing the power at 8.24.  Connellsville another double stop, 9.44-9.46 and 9.46-9.48.  Bedtime.  I observe the Pittsburgh stop but don't record the time.

Must be restful and close to time, next station in my notes is Elkhart 8.10-8.11, at South Bend the old station is on trackage shared with Canadian National, held for two eastbound CNR freight trains. 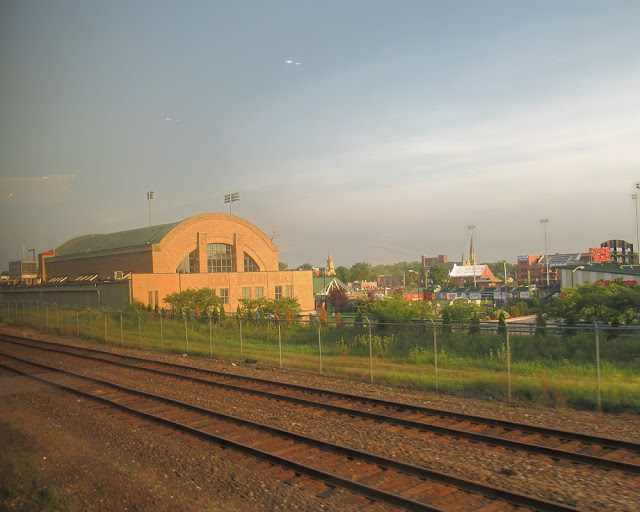 The adjacent baseball field is the Chicago Cubs' South Bend farm team, one reason there are people in South Bend who would like to bring the South Shore Line's electric cars into the former passenger train station downtown.  Amtrak still use the former South Shore Line cinder block building west of downtown; stop 8.39-8.42.

East of Michigan City, the South Shore still offers a believable representation of the Indiana interurban, but bi-level multiple unit cars are on the property, and constant-tension catenary is coming. 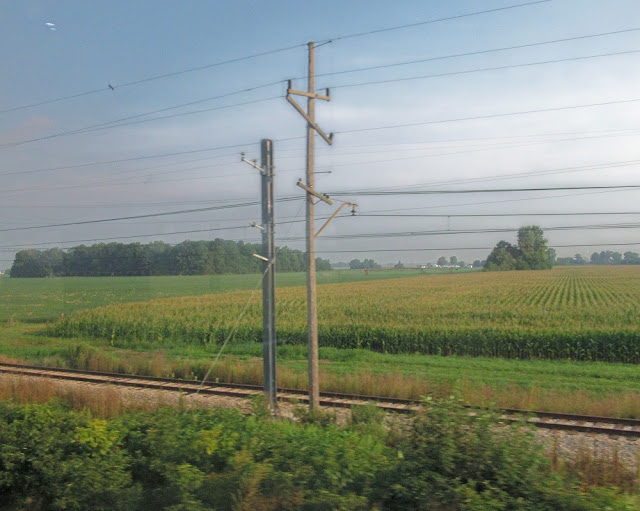 We're maintaining forward mobility despite being a little behind schedule.  At Chesterton, there are four former South Shore standard interurbans, once intended for some kind of hostelry, currently idle. 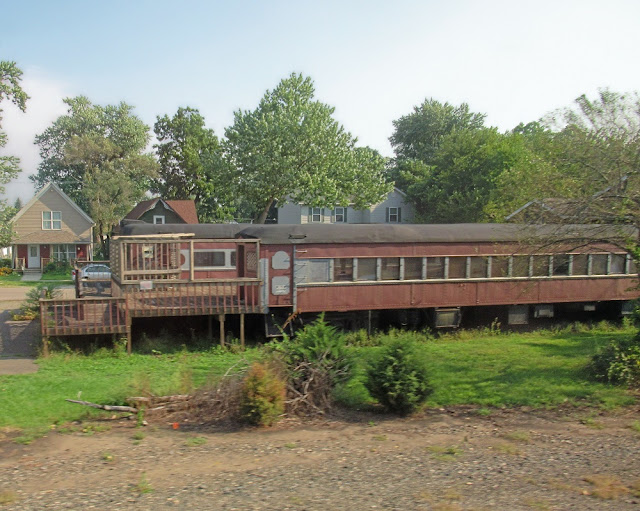 A few weeks later, I got another view of the property, this time from trackside. 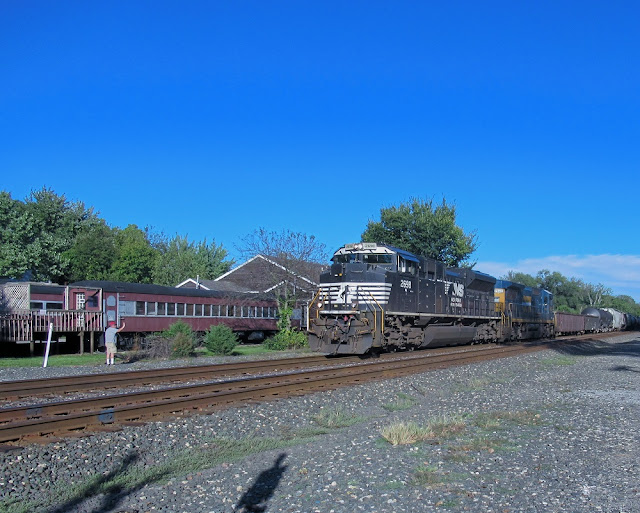 The railroad themed Riley's Railhouse, with a webcam view of the Norfolk Southern action, is on this side of the tracks.

Beyond come the steel mills. 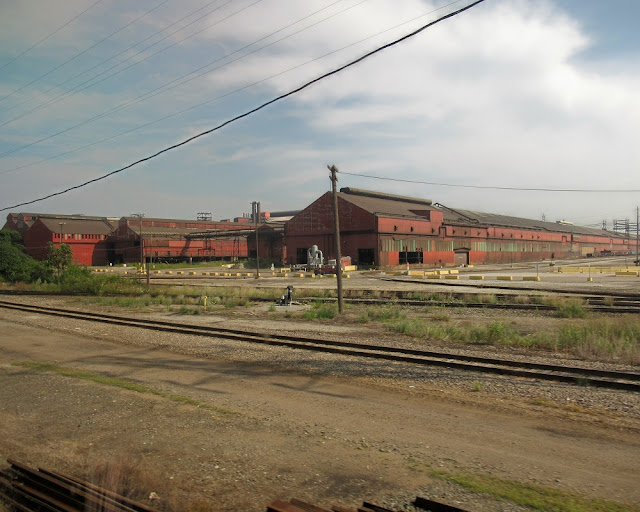 The long-distance trains no longer call at Hammond-Whiting, and Phil Smidt's restaurant, known for fish fries and frog legs, is long gone, although the station might still be a good place to watch trains.  Arrive Chicago 10.18, going on two hours late. 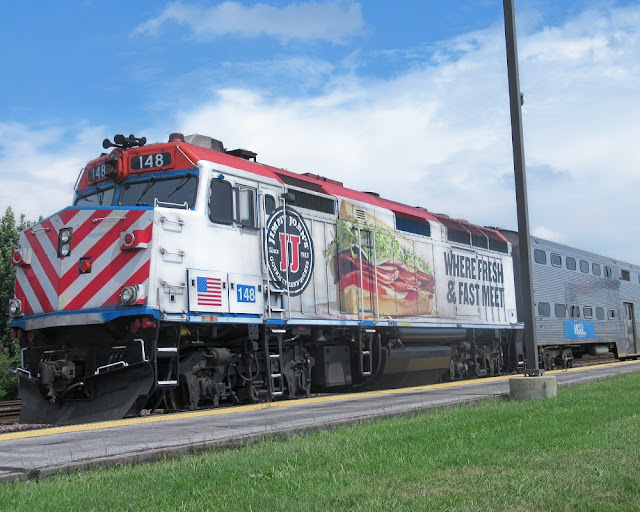 One way for Metra to lose a little less money is to sell advertising space in the form of wraps on locomotives and coaches.
Posted by Stephen Karlson at 13:49