WHEN THE CARS WERE SERVICED AT COLD SPRING SHOPS.

That gives local historian John Gurda an opportunity to recall the cars of The Milwaukee Electric Railway and Light Company.  "Eastern capitalists joined with local leaders to create the Milwaukee Street Railway Company, a full-fledged utility that was the first in America to provide electricity for lighting, power and transit from a single central station under a single corporate ownership." That central station also provided spent steam for central heating, thus The Milwaukee Light Heat and Traction Company.


Although The Hop is thoroughly modern, it is undeniably a streetcar system, and that, to some vocal critics, is the height of absurdity. Why, they ask, are we resurrecting a system that our grandparents abandoned? Why go back to the rust-streaked past when the future promises us driverless cars?

Why? Because The Hop could be the down payment on a system that clears the city’s center of its automotive clutter and speeds residents to jobs, shopping, home and recreation as efficiently as the cars of the John I. Beggs era — while it promotes development and creates tax base.

Could it happen? It will be years before we know for certain whether The Hop will be more than a novelty for residents and a curiosity for visitors. Milwaukee lacks the congestion that has made light rail a necessity in New York, Chicago, and even Minneapolis, but that could change as downtown continues to blossom. In the meantime, the tracks are down, the cars are here, and the rides are free.

There isn't going to be enough parking space for those driverless cars, let alone a business model to cover the costs of providing enough cars.

The icon of Our Lady of Sewer Socialists is next door at Old St. Mary's Church. 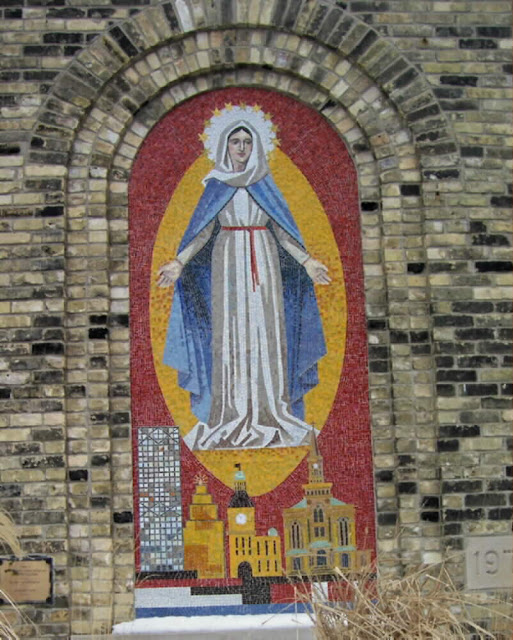 The contemporary cars will not have to deadhead to Cold Spring Shops on the west side for maintenance. 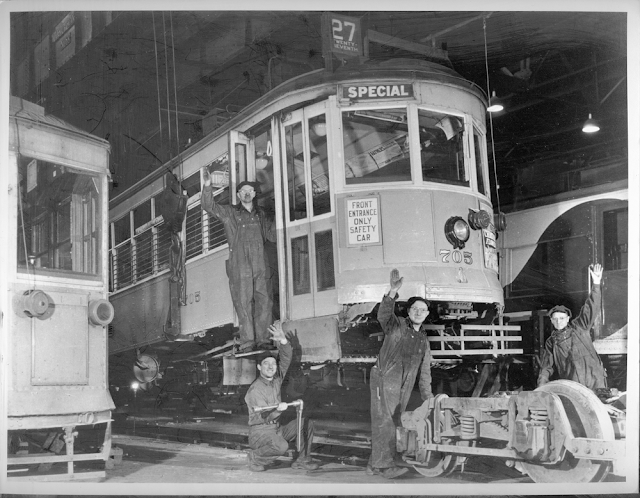 Some of the older Milwaukee streetcars are still in preservation, in Wisconsin, in Illinois, and in Maine.
Posted by Stephen Karlson at 13:23